They're not on dope, they're on rocketships.

Your faithful cycling correspondent here again, the Ayatollah of Geek & Rolla!  I made the arduous journey to the wilds of Santa Cruz yesterday to watch the Tour of Calfornia go over what has become one of its signature climbs--Bonny Doon.

The climb itself is about 7.5 miles and climbs from the beach to 2,000 feet.  The bottom is really hard, with a long stretch (about a mile) of 10%+.  Then it just climbs steadily for the last 4.5 miles.
I got the chance to do 2 trips up the climb before the pros arrived, which was an experience in itself.  The fans packed along the side of the road were cheering for everyone riding up the climb.  I was already tired from riding around Pescadero earlier in the day, so when I hit the 10% section, the legs started to scream.  But when dozens of people are ringing cowbells at you and cheering, you don't think about how you feel.  You just get out of the saddle and hammer, because this will not happen again.
Absorb the "Pro" moment.  Cowbells, drunken fans, absurd costumes.  Deep in the pain cave.  Totally epic.  For extra Pro credit, instead of falling off the bike at the top of the steep part, slam it into the big ring.
Sporadic cowbells for the next few miles, and then at the 1km to go sign, it got loud again.  Big Ring.  Thankfully it is not that steep, and I could fake it over the top. 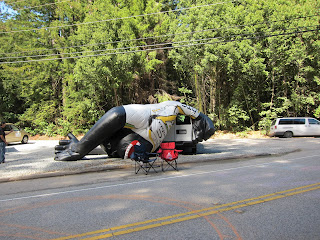 Uhhm...the gorilla was clearly not impressed by my speed over the top.  Presumably he got a bit more pumped for the pros.
I did not get photos of the crowded part of the climb, around mile 3 where it is steepest, but you probably saw it on tv.  Because they closed the road while I was riding down after my second ascent, I watched at mile 4, where it is only about a 4% grade.  I chose my spot because a resident had dragged their tv out to the street, so we could watch the live coverage while we waited.
They were hauling ass, even though at this point, Levi had decided not to push 100%.  Looks to me like they are rolling in the low 20s.
Here comes the chase.  You don't often see guys going uphill in the full aero position like the guy on the front here.  I do it, of course, but mostly because I am too tired to hold myself up anymore.
Ah, finally.  Here are some chaps I can appreciate.  The "autobus" rolls by at a pace that seems more human.  Chatting, smiling...looks like a party bus.
Local boy Scott Zwizanski of Bissell came by between the chase group and the peloton, looking exhausted but focused.  When I have ridden with Scott he never seemed to leave zone 2, so it is nice to see him suffering like a dog--I taught him that trick.  One guy who did not look to be having fun was Andy Schleck, who looked like he had swallowed a live badger when he trudged by behind the peloton--he should have been hanging out in the party bus.
Posted by Unknown at 08:05 No comments:

Zero to Hero...by the numbers

I recently signed up for Strava.com, which is a very cool website that tracks your bike rides and allows you to compare them...both with your other rides and with other riders.  It has a cool feature where it takes your GPS data and automatically computes your times and power outputs for various segments, like climbs.

So, I just uploaded more than a year of files from my Garmin, and I can see very easily how I have improved, and how I stack up against other local riders who are on the system.  Of course, right now while there are not yet a lot of other riders on Strava, I look great.  I am the King of the Mountain for the Marshall Wall!  Suck on that, beyotches!
What is very cool, and super easy to do relative to other websites like TrainingPeaks, is to map your progress.  Take the Hwy 1 climb from the Pelican, for example..... 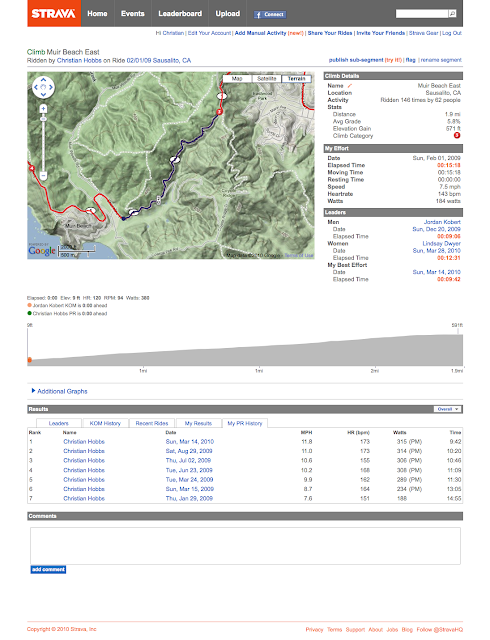 It is clear that all the miles I have been riding seem to be helping with fitness.  This would be more scientific if I pushed all out on this climb every time, but it usually comes at the end of a long ride.  I tend not to slack on it, though.
We can see that my wattage has steadily improved and my times have plummeted.  Interestingly, the top 2 entries show the power of weight.  They may also show that I am not getting aerobically any better, but more on that later.  In August 2009, I was probably 4kg heavier than I am now.  There is an old saw in the pro peloton that 1kg is 30 seconds over a 30 min climb.  The 2 entries show the same average heart rate and power, but 40 seconds faster over the climb.  That is exactly what you would expect based on 10 seconds per 10 mins of climbing.  Looking at this makes it really tempting to become a weight weenie.
So, I am not getting any fitter?  Well, looking at another climb shows that all is going well on that front.  There is no way to go easy up Panoramic from Stinson, and I tend to always do it at threshold.

On this climb, we see a nice progression.  Not sure why I avoided it for almost a year...actually, I know why...it hurts.  The latest time is a bit weird in that the power is the same, my weight should be the same, and yet I was almost a minute faster.  One explanation is that the most recent effort was on my Time, which is stiffer, lighter, and most importantly, has a slightly more conservative power meter.  The power for Apr 15 is (under)estimated by Strava...I was riding the Corvid prototype that day.
By the way, the little dots on the elevation profile are the relative positions of me and the KOM leader.  You can track how you did against your previous efforts or others' efforts to see what strategy gets you up to the top fastest--start slow and accelerate?  go ugly early?  steady?  spin or mash?  stand up often or stay seated?
For me, Ulrich-style is the way to go.  Steady, seated, patient.  Ulrich was the Terminator of the peloton. He felt no pain, no remorse, no fear.  He would keep hunting you forever.  Of course, he was doped up to the eyeballs, but minor details.
So where do I stack up on Panoramic? 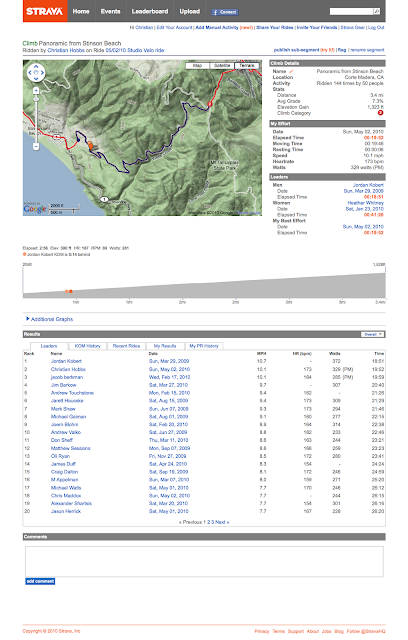 A distant second at the moment.  I don't know who Jordan Kobert is, but I am guessing that he has no torso....just 2 huge frickin' legs with hands at the top to steer.
There is still some weirdness to the data.  Take the climb from Fairfax to Pine Mountain, for example, which I used to use as a 20 min test.

Seems like the 2nd and 3rd fastest times had a lot higher power, and should have been fastest on a climb where wind is not really a factor.  Here again, it might be the power meter.  The fast time was on the Time with the SRM, and the other 2 times were on the IF with the Quarq.  But either way, I was hammering for all 3 ascents and am a bit surprised by the times.  I need to hit this one again hard in the near future on the Time and take it sub 15 mins.  The KOM right now is 14:10.
Okay....all geeked out and my head hurts.
Posted by Unknown at 13:24 1 comment: