I got an iPad on launch day, hoping to free my back from the tyranny of carrying my MB Pro.  My intention was for the iPad to be my conference machine.  At conferences, I typically only need a browser, Twitter and Evernote.  Simple enough.  The iPad can handle all these just fine.

But my first few gos were not that pleasing.  The virtual keyboard on the iPad is actually decent.  At first I carried an Apple bluetooth keyboard, but I found that it did not add enough value for the weight and bulk.

The size and battery life of the iPad are great.  I can wander around a conference without a bag, just the iPad in my hand.  No need to carry a plug.  Chances are, at most conferences, there won't be any available.  Big props to TechCrunch in this regard, for stringing hundreds of power strips and even good old ethernet--I love you guys for that.

There were two real problems that were holding me back from loving the iPad as a work machine (I love it at home for reading and the kids).

The first was the lack of multitasking.  Switching between apps was cumbersome, and it caused me to miss some notes I should have taken, or not get a witty tweet out (horror!).  Of course, this problem has finally been somewhat solved with iOS 4.2, and the iPad is now much better, though still not as slick as just clicking between windows.

The second was, and is, the crippled browser.  Mobile Safari is just not a great browser, and the lack of support for extensions means that I can't use 1Password or LastPass in the native browser.  Since I can't remember most of my passwords, that means I can't browse a lot of sites.  Also, many sites just don't seem to work that well in Mobile Safari, either because of Flash or other issues.  I have gotten used to extensions that shorten URLs, mail out links, etc., that make my life easier.  None of this works on the iPad.

A related issue is really Google's fault.  The consolidated account system they now use in Google Apps, so that my Google Apps account and my Gmail are linked, is really a pain in the ass.  It makes it harder to work across the accounts in a single browser, instead of easier.  So, on my laptop I just use Safari for Gmail and Chrome for Google Apps.  On the iPad, you are in one or the other, and fast switching, which is possible on the desktop browser, is not supported in the mobile version of Google Apps.  The Mail app is better in 4.2, but still does not quite integrate properly with Gmail.

So, I resolved to get an MB Air.  At first I was just going to pick up a used one during the summer.  But then I heard rumours about a new model on its way.  For some reason, people on Craigslist seem to be on crack when it comes to what they think their used gear is worth.  And so I waited, and waited, and waited.  And, finally, last month I got one.  The MB Air has basically the same specs as my MB Pro, but at half the size.  It is about twice the size of the iPad, but so much more useful.  The iPad's battery life was a huge plus for conferences, but the Air can go all day as well, especially if I can get wifi and don't have to use my MiFi.

The iPad has been relegated to home duty.  The kids love to read stories and watch videos on it.  I read the morning paper and catch up on RSS feeds.

Interestingly (well, maybe only to me), Twitter has been a casualty of the iPad demotion.  I love to read Twitter on Flipboard, so I wait until I grab my iPad to read it, instead of following throughout the day.

I almost got the 11" Air, which is more appropriately an iPad replacement.  But the screen on the 13" is more usable, and it gives me a lot more power for when I work remotely.  Still, that 11" is so small.  For users who do most of their stuff in the cloud but still need more than a netbook, it may be the perfect laptop.
Posted by Unknown at 14:12 No comments:

So Santa dropped this box off yesterday. 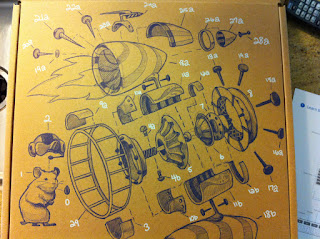 At first I thought my wife had gone insane on Amazon, but it turns out that it was a present from Google.  Looking inside..... 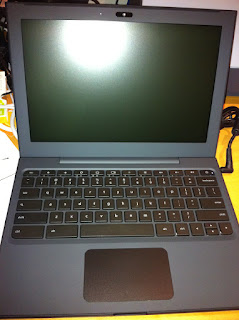 Oh yes, CR-48 hotness.  There was a one page note with some basic instructions, but interestingly, everything was technical stuff about how to operate the netbook.  There were no instructions as to what I was supposed to do with it.  Was it a gift?  A loan?

Lots (probably thousands) of people received the same gift over the last couple of days.  Clearly Google is giving them out to early adopters, and looking for feedback and and some blog posts.  So, I will oblige.

The big deal here is obviously the ChromeOS.  The hardware is all going to change by the time this gets to a wide public release, but I will touch on it anyway.  The CR-48 has the same footprint as a 13" MacBook Air, but is about twice as thick as the thick part of the Air.  It is hard to get as excited about the CR-48 as I might be, because I did recently get the new MB Air, and it is abso-frickin-lutely amazing.

My setup experience was great, but some of that is due to the fact that I already use Chrome as my primary browser, and I have Chrome Sync set up to sync bookmarks and extensions across my machines.  So, when I fired up the machine for the first time and gave it my gmail login, about 10 seconds later, I was looking at exactly the same thing I would be if I were in the browser on any of my machines.  Kind of like the way Apple makes it dead simple to migrate settings, but much simpler because so much less is being migrated.  My 1Password did not make it over, but LastPass seems to work fine.  This is important because I don't store my passwords in the browser, where they are too easy to get too.

Bootup time is a few seconds.  And it is basically instant on when you open the lid from standby.

The ChromeOS is basically just the Chrome browser, with some apps tagged on.  How well this works for you depends on where you personally are in migrating your life to the web.  For myself, I am pretty far along that path.  I started the journey a couple of years ago because I wanted to start using multiple machines.  Now, I have an iMac at my desk, the MB Air for moving around, and an iPad just for the hell of it.  I also have a couple of older Windows laptops.  So, I try to use applications that work seamlessly across all of these devices (and my iPhone).

The apps I use most often do, and have cloud-based accessibility, making the ChromeOS a good option.  Here are what I use most day to day:
Often I will use a desktop client to access the data in these apps--PostBox for mail, BusyCal for calendar, Seesmic, Evernote, Remember the Task for Remember the Milk, Jott--but that is to keep my browser tabs from being completely out of control.

Fortunately, LogMeIn works just fine in ChromeOS, so if I do really need the desktop, I can just remote in to it.  For Quicken, I do that anyway from my laptops.  Everything else that I use regularly can be dealt with in a browser just fine, except for MS Office apps.

If you can get away with just Google Docs, then it is hard to see how you need more than the ChromeOS.  In fact, as Microsoft improves the could versions of the Office suite, then this issue may go away.  Offline support is supposed to be coming back to Google Docs, probably specifically to support ChromeOS.

There are apps for the ChromeOS.  I tried a few.  The NY Times app looks exactly like the iPad app.  I would guess that will be true for many apps where they are going to leverage an HTML5 content structure into native wrappers for various platforms.  Other apps like Remember The Milk are just web pages masquerading as an app.

The only issue I have had so far is with the trackpad.  Some of this is hardware related.  The trackpad on the CR-48 is set a bit too far to the right, so the heel of my right palm hits it often.  This caused a ton of annoyance with the cursor position bouncing around, and made it very hard to write anything.  However, disabling the "tap to click" in settings has helped enormously.  The mouse may move around, but at least the cursor position does not change.  The trackpad is still wonky and jerky, so they need to spend some time with the drivers to sort that out.  Does not seem too hard.  I know that they were under pressure to get this out, and feel like this is truly a beta, as opposed to most of Google's betas, which seem more fully baked.

Other users have complained about flash bringing the CR-48 to a crawl, but I ran two simultaneous YouTube streams while typing some of this blog entry and it seemed fine.

I did see some oddness in a couple of emails where the attachments did not show correctly.  On another email, I successfully download a .docx attachment into a downloads folder, but I could not open it--it gave me an "Unknown file type" error.  This is odd given that Google Docs can deal with the docx format.  I could click on "view" instead of "download" to see it in html and then save it to Google Docs, which is what makes sense anyway in a browser-centric universe.

I don't know what the eventual selling price will be for ChromeOS netbooks.  Probably similar to the Linux netbooks today and slightly cheaper than netbooks with Windows Starter.  I am not a fan of Linux because, while it has gotten more user friendly, it is still not appropriate for the mass market.  The ChromeOS may well kill it in netbook applications.

With my MB Air, I am not going to use the CR-48 as much as I might.  It would make a great companion computer for a desktop.  Battery life seems impressive from an average sized battery, so the processor must not be having to work too hard.

Basically, if you already live a browser intensive lifestyle and use Chrome a lot, you will really not notice the ChromeOS, which is a good thing.  It will just feel like any other computer--just a whole lot cheaper.
Posted by Unknown at 12:52 2 comments: