Has TechCrunch Disrupt jumped the shark?

I am hanging out at the TechCrunch Disrupt conference this week at the Design Concourse in SF this week. I have attended the conference every year since its inception as TechCrunch 40 in 2007, and it has always been top notch in terms of seeing exciting companies and speakers.

This year, though, has been a disappointment so far. Every year, it has grown, but this year it has finally gotten too big. Too crowded, too hot, too many exhibitors. Basically, too much focus on making money and not enough on providing value to the attendees.

This is the most expensive conference I attend, with a rack rate of $3,000 for the three days. Exhibitors also pay a lot to be here. Sponsors like Ford pay a lot to park a car in the hall. Meanwhile, most of the staff are volunteers, anxious for exposure to the magic startup ecosystem.

But this year, that magic ecosystem at Disrupt is turning into a ghetto.

In previous years, there were a lot of VCs and other investors, and financings got negotiated. This year, it is almost more of a jobs fair and networking pow wow. There is a huge number of startups with tables exhibiting in the main hall. So many that I can't possibly interact meaningfully with them. And yet, they are paying the same amount to be there as in the past. Most of the people they talk to are probably looking for jobs or networking. The VCs here are mostly up on stage, and I have not seen them spending time amongst the peons out on the conference exhibit floor.

There are almost 100 companies exhibiting today that get kicked out in favor of a new batch tomorrow.  How can the possibly be getting their money's worth. That isn't even counting the various "national pavilions" with another 40 or so companies. Like a swarm of underslept locusts, they devoured the lunch buffet. I had cookies and salad for lunch as the chicken was all gone, as were the drinks. 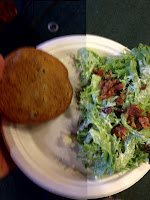 It is really warm in the auditorium because there are too many bodies. Air conditioning costs money (they had it in previous years). The wifi does not work--WTF? this is a tech conference! There was no parking available nearby, even in the paid lots. Bitch bitch bitch bitch......for $3k they should do better.

Worst of all, the quality of the conference content is also down this year. In previous years, 50 startups presented; only 30 this year. Could it be because presenters don't pay? Speaking of that, there have been a number of "conversations" so far on stage that were thinly veiled commercials. I am guessing they were paid for.

Why is Jessica Alba here to talk about entrepreneurship? To give us such nuggets on as "it is really, really hard"? WTF? And yet, what do I know? The auditorium was at its most crowded for Jessica, and a bunch of people left after she finished. And, she got a free pitch for her new company.

And, of course, let's not forget this guy.....I am glad some of my entry fee went for tumbling clowns. 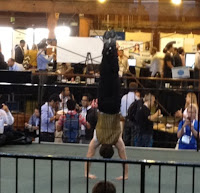 We are not quite through the first batch of company presentations, and so far, they are good. The best presentation has been by Steve Newcomb of famo.us, a 3D app framework. He channeled Morpheus in voice and style. By the end, I thought he was going to offer me a choice between the red pill and the blue pill. Of course, it was no Tonchidot.

Hopefully over the next two days the quality of the companies presenting will change my mind, but at this moment, I don't think I am coming back next year. If I do, I am wearing shorts and bringing a cooler of beer.

[Update: the dancing robot has partially redeemed the conference experience.]

[Update: apparently the air conditioning is broken, but will be fixed by tomorrow.]