until one realizes that the problem is not that the motorist cannot see you....it is that they are an idiot and just not paying attention.

If you are going to put a frickin' laser beam on the frickin' bike, do it properly, like so...

Driver chatting on the cell phone and doesn't see you? No problem. When you pump 200 gigawatts into them, they will notice you in the split second before they vaporize.

Where this product is quite useful is in maintaining the moral high ground when caught riding drunk. "Sure I was weaving, officer, but I was staying in my lane."

What kind of geek are you?

Here is an easy way to determine what kind of geek you are? Are you currently standing in line outside an Apple store, twittering about how cool it is to be rained on while waiting for the new iPhone? Yes?--then you are a dumbass geek. Did you pre-order your iPhone 3GS, and are sitting comfy at home browsing p0rn while waiting for UPS to deliver the goods? Yes?--you are a diligent geek. Did you decide "ah, screw it, I don't need a new iPhone"? Yes?--you're no geek.

Did you buy a Palm Pre? Yes?--see dumbass geek above.

I have decided to wait for a week until thing settle down, which gives me time to explain to my wife, whose older iPhone is eligible for the cheap upgrade, why she really needs my 3G, and should let me have the 3GS.
Posted by Unknown at 08:26 No comments: 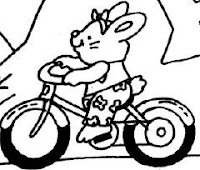 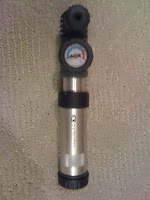 This pump is outstanding if you are a mouse. I got it because I needed a pump to travel with that had a gauge on it. This pump must be targeted at those with really, really, really small wheels, because it pumps a 1/2 thimblefull of air at a time. It took me 20 strokes to get a 1psi increase in pressure. Since I had to mostly deflate my tires to pack the wheels into the travel case, I got a nice long upper body workout pumping them up.

Lucky for me, my tires lose about 5psi a day, so I can stay in shape. Actually, I have just been riding to the nearest shop and borrowing a floor pump. I don't want to get all Hans & Frans.
Posted by Unknown at 08:51 No comments:

Stranger in a strange land 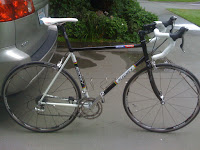 I am up in Seattle this week on vacation. Yes, I realize that I am unemployed, but deciding whether to ride, go for a paddle, or catch Sally Jessy Raphael reruns is exhausting, and I needed a break.

I wanted to keep riding while I am here, so I had a look at options for a bike here. $500 to rent a decent bike for a week seemed ridiculous, so I looked at travel bikes. I am not secure enough in my manhood to ride a small-wheeled clown bike, so I picked up a Ritchey Breakaway.

I picked the bike up on Thursday, and flew up on Friday. 6 beers into a party on Friday night, someone told me about the Flying Wheels, Washington's biggest century ride, taking place the next morning. What better way to break in a new bike than by riding too far? Better have a couple more beers.

I did the Beardsley Hangover Start® the next morning. The century started at 8am. I made it to the start line at about 945, when the stragglers for the 65 and 45 mile options were rolling out.

Ever wonder who buys all those fake beer company jerseys? Now I know. Those jerseys must weigh a lot, because lots of people were walking up the small climbs. I finally hooked up with a guy who was just out on a training ride and hammered at 25mph for an hour. That cured any thoughts of doing the full 100 miles. I caught up with the 100 milers and had a nice run back to the start.

The bike was great....it has been a while since I rode a steel bike. There is just something magical about the ride of steel. I don't know what it is, but enough people tell me so that it must be true. Pity about the back breaking (for me) 6cm drop from saddle to bars. I would buy a new stem, but I spent my money on white bar tape and a white saddle to look more Euro.
Posted by Unknown at 08:21 No comments:

See the article here, or the full URL below.

Note that the bit on dehydration not impacting performance is really only meant to apply to minor dehydration, I think. I have seen lots of studies showing that significant dehydration negatively impacts strength by screwing up the pH balance in muscle cells.

Regarding myth #1, no longer will your significant other have the excuse "not tonight honey, you have to ride in the morning".
Posted by Unknown at 08:12 No comments:

I won the Friends of Tamarancho Invitational Mountain Bike Race today. Well, I won the beginner class. Er, actually, the beginner masters class. So I am the king of the weak, the old and the apathetic. Still, I won a nice pair of socks and a water bottle, and I only had to suffer mightily for 45 minutes to do it. Most categories got to play for 2 hours and 3 times up the unpleasant Dead Heifer climb.

Tamarancho is the only mtb race in Marin, run on the Camp Tamarancho Boy Scout reservation. It features the best legal singletrack in the county, and, except for race day, bikes are required to stay on the singletrack and off the fire roads--no problem.

The most notable feature of the course was the Dead Heifer fire road climb. Short, but very steep, and barely rideable for most (nobody in my group). Why do they call it Dead Heifer? It is too steep for a cow to stand on, much less die on. Maybe they used to push cows off the top of it.

I ran up most of it and was pretty cross-eyed when I got to the top, but I crested in the lead of the beginner class (at the time I did not know they had a masters subcategory). I was pretty excited, but could not rest on my laurels as I was being chased. 15 minutes later I was still hammering in the front, with my pursuer about 15 seconds behind. The training crits in Santa Rosa were definitely paying dividends now.

I managed to crash into a tree in a section that required zigging and zagging at the same time. My watch took the brunch of it, broke off and tumbled down the hill.

ooops.....glad I hit the watch first

I watched my beloved Suunto fall for about 5 seconds while I thought about whether to keep going or go get it. I decided to go get it, and when I got back on my bike, 2nd place was right behind me. I got passed on an uphill section, but figured I would just hang on and then sprint around him. That was a great plan, but he was not playing along. He flew through the last singletrack section and opened a gap that I could not close. I managed 2 more minor crashes thanks to severe oxygen deficit before I decided to slow down and enjoy/survive the ride.

The team did well as always. Scott got 2nd in the Cat 1 masters, which has lots of fast guys, and Ann took 3rd in the ladies' cat 1 masters.
Posted by Unknown at 22:30 No comments:

Last Tuesday (6/2) marked my second and perhaps last time participating in the Tuesday Night Twilight training crit series in Santa Rosa. It was the 6th race of the series, but I am slow to catch on to good things, and only made it up there the last two weeks.
It is a shame that they currently have no plans to continue them--their permit was only for 6 races this year. The course is great--fast, safe and easy to park. Unlike many crits, the corners are wide enough to pedal through them at full tilt, and even the Cat 5 racers seem unable to hurt ourselves (except of course my legs). There are 3 races--first off is the Cat 4/5 for 30 minutes, followed by the 3/4 and finally the slightly longer 1/2/3 race. The arrangement allows most people to race twice and get at least an hour's thrashing.
Last week was my first road race in about 20 years. I managed to hold up the back end of the 4/5 race, and then hang in the 3/4 for about 15 minutes before I had a mechanical (my legs broke). This week my goal was to see the front end of the pack, and finish the 3/4 race. The 4/5 race has "mentors" who keep folks out of trouble, although they did nothing when the recently crowned state criterium champ tried to put me in the curb. Fortunately, he was the champ in the 10-12 year old category, and weighed less than my front wheel, so I was able to fend him off. I spent the whole race at or above lactate threshold--fun.
After a cool down lap it was time to go for the 3/4 race. The 3/4s are actually slightly easier for me. In the 4/5 race, people do weird things like brake going into corners. I am too damn old to be sprinting out of every corner, so I generally don't like to brake going in. The 3/4 race is slightly faster, but a lot smoother. I took Todd's advice that the best way to ride the rhythm I wanted was to go to the front and set it. After hammering full speed through several corners, I looked back and was surprised to see that, except for one guy, the field did not think much of my pace and was pottering along a hundred meters back. My breakaway companion declared that it was time to go, and the prime bell rang. I tucked on his wheel as we upped the speed again, and shortly thereafter got a note from the engine room--"we're done". My break companion won the prime; I spent the rest of the race in familiar territory at the back of the pack, but I made it all the way to the line.
Scott and Todd cleaned up, winning primes and taking 2nd and 3rd in the 3/4 race. Their reward was as much booze as they could carry.

to the victors, the spoils

The prizes at this series are better than any other race I have been to. Ronnie Lenzi and the NorCal Bikesport team do a great job and everything runs smoothly. It is impressive for a "training" race. It is amazing how different racing is from training and club rides. The speed and constant intensity mean that you do have to race to train for racing.

And after the race, of course, the feast. We patronized a local authentic latin restaurant to replace all the grease we burned racing. Good times!

ahhh, sweet beer
Posted by Unknown at 22:28 No comments: